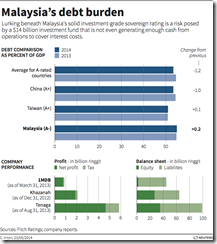 From Reuters: (bold mine)

Lurking beneath Malaysia's solid investment-grade sovereign rating is a risk posed by a $14 billion investment fund that is not even generating enough cash from operations to cover interest costs.

Regarded as a cross between a sovereign wealth fund and a private investment vehicle, with Prime Minister Najib Razak chairing its advisory board, 1Malaysia Development Berhad (1MDB) is struggling under the burden of $11 billion in borrowed money.

The government says it only guarantees around 14 percent of the debt. The investment community assumes it would provide more if needed, and it is the potential strain on Malaysia's debt position from these contingent liabilities that raises concern.


Critics have questioned its investment choices, the size of its debt, $2.25 billion parked in a Cayman Island fund, hundreds of millions of dollars of revenue earned by Goldman Sachs for handling its bond issues, delays in its accounts, changes of auditors, and a perceived lack of transparency.

A $1.9 billion bridging loan that fell due in November has been rolled over twice, most recently two weeks ago, in order to give 1MDB more time to launch a $2 billion initial public offering that would reduce debt incurred buying 15 power plants. In a statement published on May 23, 1MDB said the IPO for its power division will take place in the second half of this year.

In 2013, 1MDB, with liabilities of more than $13 billion, generated cash flow of 860 million Malaysian ringgit ($267.75 million) from operations, far below the annual interest outgo of 1.62 billion. It would have made a 1.85 billion ringgit loss, but for a 2.7 billion ringgit revaluation of its property portfolio.

Opposition leader Anwar Ibrahim was quoted at a news conference in late April warning; "If we continue with this culture of accumulating debts, Najib's 1MDB will fail and become a liability that should be called 1Malaysia's Debt of Billions."

Malaysia’s debt to GDP from tradingeconomics.com

The increasing recourse to accounting magic….

Malaysia's debt-to-GDP ratio stood at 53.8 percent at the end of 2013, central bank data shows, up sharply from 43 percent in 2008 and close to an official debt ceiling of 55 percent, beyond which the government must seek parliamentary approval.

Contingent liabilities, however, stood at 15.9 percent of GDP, up from 9 percent in 2008, bringing total government and government-backed debt to 69.7 percent of the economy, and the off-budget character of 1MDB raises questions.

"It can be viewed as a way to circumvent the 55 percent ceiling on government debt to GDP, while shielding this spending from parliamentary scrutiny," said Prashant Singh, a fund manager at Neuberger Berman in Singapore.

This also reveals how credit rating agencies have been mostly remiss or derelict of their fundamental duty: the monitoring credit risks.

-“Investment community assumes it would provide more if needed” means three things: excessive complacency, extreme overconfidence, and the implicit pressure on the Malaysian government to backstop 1MDB’s liabilities. These are signs of Moral Hazard—public taking on more risks in the hope that government will guarantee their actions against potential losses. Creditor’s probably think that the Malaysian government is a perpetual fountain of wealth.

Yet like the Philippines, Malaysia’s government has been draining the much vaunted foreign exchange reserves to defend the currency; the ringgit. This is a sign that there is no such thing as free lunch.

-Because cash generated by 1MDB (860 million ringgit) represents only 53% of interest costs (1.62 billion ringgit), the company resorts to Ponzi Financing dynamics of DEBT IN-DEBT OUT complimented by sale of assets (proposed IPO). This dynamic can only be maintained for as long as interest rates remain low. Yet what is unsustainable won’t last. 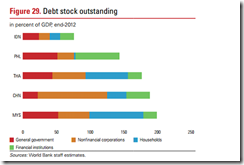 -This stirring comment by opposition leader Anwar Ibrahim “culture of accumulating debts” echoes on Malaysia overall debt conditions. Such signifies not only risks for 1MDB or for the government alone but for the entire Malaysian economy as well. Malaysia’s debt stock as % of GDP has even been larger than China! And this has been mostly due to household debt thus the Mr. Ibrahim's association of debt with "culture".

Rising inflation rates and weakening currency which adds to inflation (via import prices) are signs that credit boom days of Malaysia’s bubble economy have reached a maturity phase. Such has been partly reflected on rising 10 year bond yields.

Yet since the Malaysia’s financial system increasingly depends on the rolling over her fast mounting debt, not only will the use of Ponzi financing for both the private sector and for the government deepen or intensify, but accounting skullduggery will most likely serve as another route. The Malaysian government’s debt accounting transfer from official to contingent liabilities in order to dodge the debt ceiling seems like an example.

As Greek historian Herodotus (484-425 BCE) aptly observed in his observation of the Persian empire: (I am quoted this on my latest outlook)

The most disgraceful thing in the world, they think, is to tell a lie; the next worst, to owe a debt: because, among other reasons, the debtor is obliged to tell lies.

But who cares about all these risks which may morph into an ASEAN Black Swan? Don't you see, stocks have been destined to rise forever!
Posted by benson_te at 3:03 PM 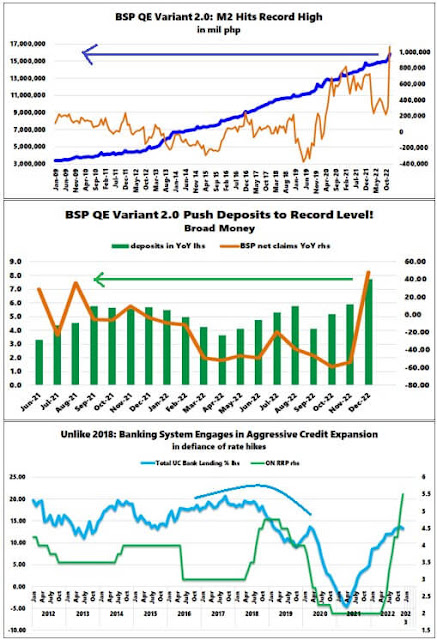